We are delighted to be running a conservation project in North Devon, spearheading a new approach to funding large-scale green initiatives.

A project based on the Caen Wetlands, close to the North Devon village of Braunton, led by the charity Devon Wildlife Trust, aims to restore a large wetland landscape which will help alleviate local flood risk, offer eco-tourism opportunities, create new habitat for wildlife and capture huge amounts of climate-changing carbon.

Horsey Island’s c.80ha of coastal habitats sit within a remarkably wildlife-rich landscape, surrounded by the internationally renowned Braunton Burrows, the Taw-Torridge estuary’s expansive inter-tidal mud and sand flats and saltmarshes, and the wet grasslands of Braunton and Chivenor, or Sherpa, Marsh.  Sea level rise is placing these coastal habitats under increasing pressure.

Devon Wildlife Trust has secured funding from the Esmée Fairbairn Foundation, Defra and the Environment Agency to carry out feasibility work throughout 2020.  A dedicated Project Officer, Gavin Bloomfield, will be investigating opportunities for the site and working with surrounding landowners, to enhance the area’s rich wildlife whilst managing risks and supporting visitors’ quiet enjoyment of the area.  As well as determining future interventions for Horsey, the project will explore ‘green finance’ –  investment to support environmental improvements and potential ecotourism facilities that in turn generate an economic return.  Locking-up carbon in new salt marshes is just one example where habitat creation may be supported by the business sector. Defra, the Environment Agency (EA), Esmée Fairbairn Foundation (EFF) and Triodos Bank UK have formed a collaboration to support environmental projects including Caen Wetlands Project to create sustainable funding models.

In the 1850s, 40 years after the ‘reclamation’ of the adjacent Braunton Marsh, Horsey Island was reclaimed from the sea.

In 1910 a storm smashed five breaches through Horsey’s sea defence.  Major works throughout 1911 were needed to reinstate the bank.

In 2017 the bank was severely compromised during high spring tides.  Attempts to repair it failed and the breach continues to widen.  When Devon Wildlife Trust bought Horsey Island in 2019, the breach was already more than 60m wide.  Horsey Island is now fully connected with the estuary once more. 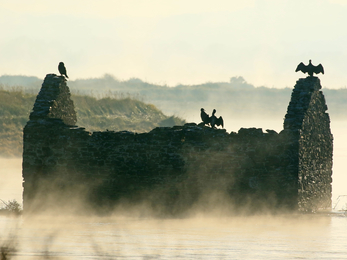 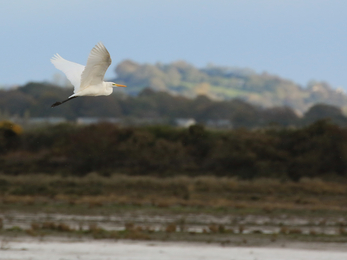 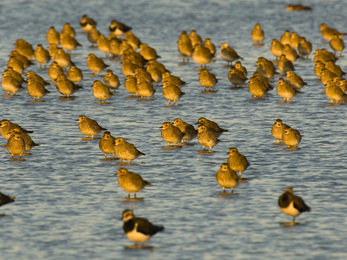 Horsey Island is an exciting, dynamic site, once again being shaped by the ebb and flow of daily tides.

Shifting sands and muds within the site are being colonised by salt marsh plants such as glasswort and sea blite.

Horsey has become one of the best places in the Taw Torridge Estuary to see large flocks of feeding and roosting waterbirds, as well as rarities such as spoonbill, great white egret and migrating osprey.

Whilst the outer bank is now impassable due to damaged sea defences, a walk along the Great Bank (parallel to the toll road) offers wonderful views over the site and across the wider estuary.

Horsey Island’s birdlife is at its most spectacular from late summer through to early spring, when it provides welcome refuge for thousands of waterbirds which have migrated south from their arctic and sub-arctic breeding grounds.  Notable species include golden plover, lapwing and curlew.

But Horsey supports birds year-round, so look out for shelduck, little egrets and peregrine falcons at any time of year.

Where can I find out more?

DWT will maintain information in the Braunton Countryside Centre’s window display and, when circumstances permit, hold drop-in events, to keep local communities and visitors informed of its work.

For more information about this exciting project, contact Gavin Bloomfield at gbloomfield@devonwildlifetrust.org

Join our community of members

The Wildlife Trusts are calling for at least 30% of our land and sea to be connected and protected for nature’s recovery by 2030. This project is helping us to achieve that ambition. You can help today by making a donation or by joining us as a member to help fund more projects like this, that will help to create and protect a nature-rich environment to benefit wildlife and people.